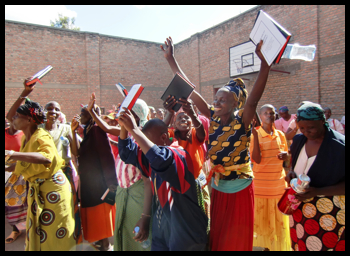 Women prisoners celebrate as they are given Bibles and discipleship booklets

In May/June 2010, IRM presented the first conference for women in prison. The God-given vision for this program began in 2008.

To date the Women's Conferences have been presented a number of times at prisons that are all women or ones that include women, additional conferences are held at village churches. When an IRM Woman's Team is available they lead the conferences accompanied by Arlene Tatum as she closes the conferences using an impactful object lesson with Irene Kamikazi, Prisca Iraguha, Winnie Muhumuza or Blessing Mupenzi translating. 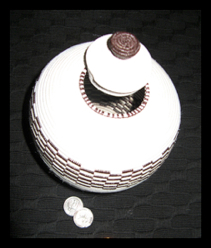 Singing, dancing, and celebrating erupt as women are given Bibles and discipleship booklets. As conferences conclude, the women are also given a head scarf and a bookmark for their Bibles, all donated by ministry partners. One woman prisoner presented Arlene with a small round basket with two tiny coins inside saying "Thank you for coming. I believe in what IRM is doing in Rwanda and I am giving you my tithe to use in your ministry."

Other women prisoners stated how very much they appreciated the conference. They said they felt honored, loved, and reassured that God still cares about them. One of the prisoners, who was a leader, said she had been in that prison for 13 years and it was the first time a Women's Conference has been held there with all of them receiving a copy of the Word of God for their very own.